HISTORY
The Plandome Golf Club was an afterthought, a fallback position. When the club’s founding fathers purchased the middle part of the Leeds estate in 1928, their concept was a prestigious residential development. The property extended along Stonytown Road, from Plandome Road to Port Washington Boulevard. However, The Stock Market Crash of 1929 intervened, and the land was for a golf club instead. Fortunately so, for aside from its challenge, Plandome is perhaps, the most picturesque golf course in Nassau County. Its first hole may well be the toughest opening hole in the entire Met Area.

The Plandome Golf Club commissioned a relatively unknown architect name Orrin Smith, from New Britain, Connecticut, to lay out its golf course. Smith formalized plans for the course by July of 1930, and the course was formally opened on Decoration Day, May 31, 1931. Smith successfully met the challenge of retaining many of the trees and plantings that had made the site so attractive to the original buyers; yet fit eighteen holes into the 107-acre site. 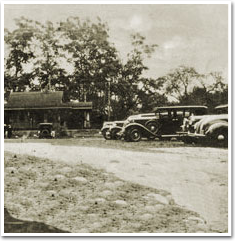 In its early years, Plandome was considered an English-style golf club, and shared a reciprocal arrangement with the Garden City Country Club. Country club facilities were added later on. The original Leeds farmhouse, a three-storey, twenty-room white clapboard and white pillared structure, was enhanced and served as the clubhouse, with the second floor the exclusive domain of the ladies. On December 23, 1958, during a major snowstorm, a fire that caused $350,000 in damage and took the life of the club’s night watchman destroyed the recently renovated building. It was replaced by the present brick building, with its circular entrance drive.

The club was reorganized in 1955, at which time the new Plandome Country Club purchased the golf course and buildings from the Plandome Golf Club, therefore averting the possibility the property would be sold for real estate developments.

Recent improvements at Plandome include the installation of mahogany lockers for the men, and the addition of a nineteenth hole, a legitimate par-3 hole between the original seventeenth green and eighteenth tee. 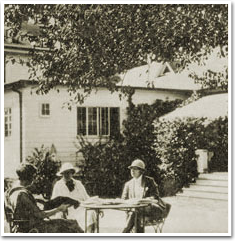 When Plandome’s first golf professional, David Hunter, returned to this country from his native Prestwick, Scotland, during the winter of 1930-1931 to interview for the head position, he felt right at home. When he reached the ridge behind the first green, over looking much of the golf course, he was reminded of Scotland and commented that Plandome was the only course he had ever liked in winter.

Plandome club championship board lists as the 1962 winner one R.L. Riggs better known as Bobby Riggs, one of the great sports hustlers of all time. Riggs no doubt could have won several club titles at Plandome, although that would not have been conducive to winning very many bets. Needless to say, the hills of Plandome are alive with Bobby Riggs stories, and there are a number of spots out on the golf course where he diligently practiced shots that later would serve him well. On one occasion, he said to have hit his tee shot on Number 18 into the swimming pool to win a bet.